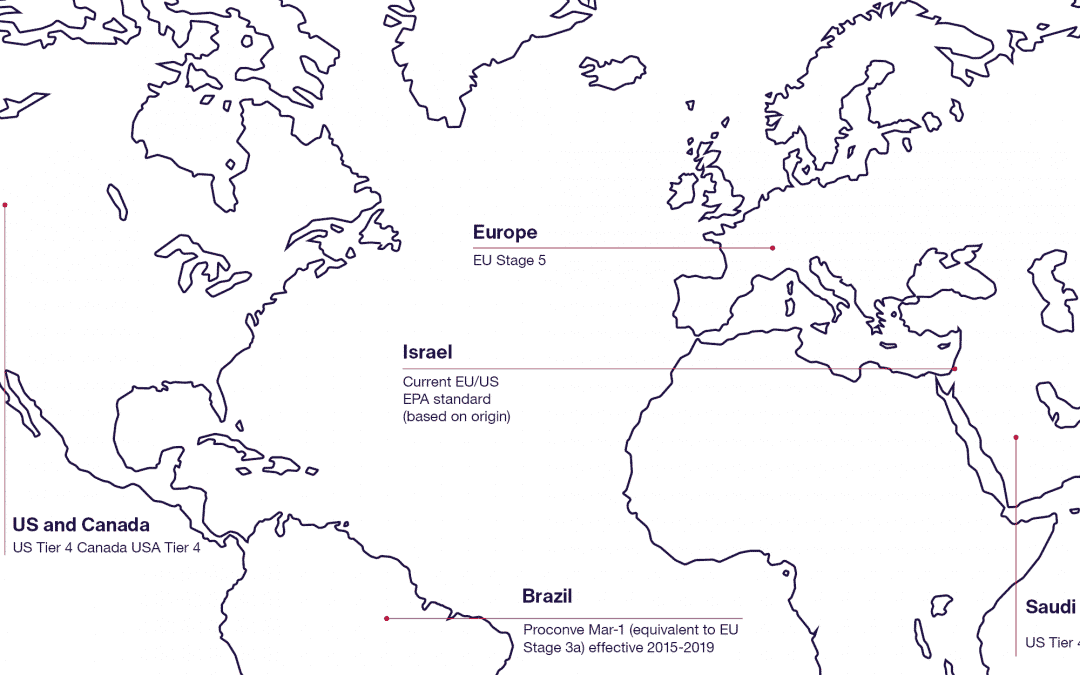 At a time of climate emergencies and many countries pledging net-zero carbon, pollution is the subject of heated debates and part of those discussions is how to reduce global diesel emissions.

Diesel engines are efficient, durable, reliable and cheap meaning they are often the preferred options of heavy-duty vehicles. However, diesel engines are one of the largest contributors to environmental pollution and have been the cause of various health problems worldwide.

Throughout the world there are various engine standards in place, some localized and others more globally recognized such as Tiers, EU Stages, and Euro but all with various levels of regulations, and stipulated acceptable emission rates, for this article we focus on those applicable to Off-Highway.

In the US, Australia, Japan and Canada Tier 4 Diesel Engine Standards are in place which are the strictest Environmental Protection Agency (EPA) emission guidance for generators and gensets, forklifts, tractors and other construction, agricultural, and industrial equipment. In Europe, the equivalent to the Tier 4 system is the EU Stage V. However, many countries are only following guidelines for Tier 1 (Saudi Arabia), Euro 1 (Bolivia, Malaysia, Venezuela) or EU Stage II (Singapore), showing there is a vast discrepancy in standards and recommended emissions.

These standards regulate how much particle matter (PM), nitrogen oxides (NOx) or black soot can be emitted by off-highway diesel engines with the objective of reducing them substantially compared to lower tiers or previous years. And to a certain degree it is working, as since the Tier 4 standards were phased in between 2008 and 2015, PM and NOx levels have been reduced by 99% on 1996 levels, but there is still work to do, especially on a global scale. 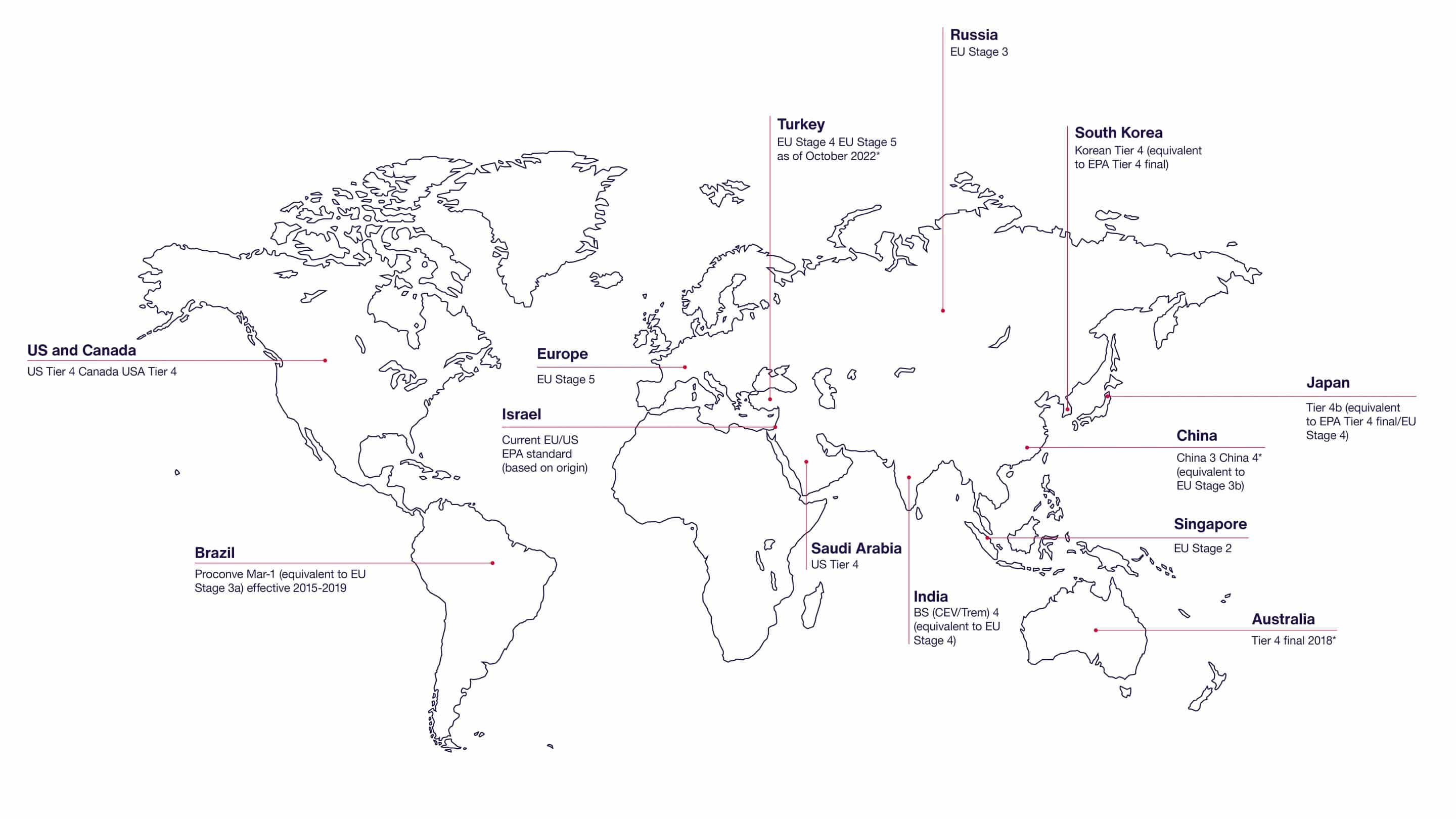 *proposed or under consideration

The requirements of the Tier 4 regulations, in general, ensure the responsibility of improving air quality lies with the engine manufacturers. However, this doesn’t mean that end users shouldn’t be aware of the regulations affecting their industry and their sites in particular. Knowledge will mean that consumers will be more aware when making choices about stationary and mobile generator sets.

This has led to redesign and reengineering of many component parts of diesel engines to meet the regulations in order to reduce pollution and potential harm to health including:

In addition to these redevelopments, there are also improvements to standards for smoke opacity, ammonia emissions, emergency operation, DEF refill intervals, and crankcase ventilation.

There are always exemptions to the regulations and Tier 4 exemptions are generally for engines below 24 horsepower as well as:

Whilst exempt from Tier 4 regulations the majority of these engines are subject to different regulatory standards and therefore do have to adhere to restrictions.

Whilst the Tier 4 Regulations are commonly used in the US, in Europe a comparative standard are the Stage V regulations which limit emissions for engines in non-road mobile machinery and includes generators, lighting towers and pumps.

These regulations apply to any engine-powered non-road mobile machinery across industries including construction, agriculture, materials handling and industrial.

It is hoped that these regulations will lead to a reduction in PM by 40% as well as introducing a limitation on the number of emitted particulates.

The regulations are aiming to lead to a reduction in emissions via particle filters which are to be applied to any new non-road mobile machinery. Stage V regulations limit carbon monoxide (CO), nitrogen oxides (NOx), particle matter (PM) and hydrocarbons (HC). In addition to reducing emissions the EU Stage V also hopes to reduce vibration, introduce cleaner burning and a reduced noise output.

Again, there are of course exceptions to Stage V regulations which include:

In November 2021 the California Air Recourses Board (CARB) held a workshop regarding the development of a Tier 5 framework heavy-duty on-road engines which would have the target of reducing NOx and PM emissions by 50-90%, depending on the engine power between 2028 and 2030. Proposals suggest stricter emission limits (reducing by 90% NOx and 75% PM), a low load certification test cycle, and extended emission durability periods.

However, the fact that the conversations have started and many countries have pledged to be net-zero carbon in the coming decades indicates that reducing emissions is something that is here to stay.

So, what can you do today?

Here at Veethree we offer our Universal Engine Monitors which provide an off-the-shelf solution supporting the requirements of an engine display for Tier 4 and EU Stage 5.

By accurate, real-time monitoring of pressure, temperatures, regeneration requirements, and engine faults you will be made aware of any issues which could be affecting your engine emissions. All these engine parameters are communicated from modern engine control units (ECU) typically over CANbus J1939, however older mechanical engines without an ECU can still benefit from an Engine Monitor utilizing Analog inputs to connect direct to engine sensors.

The UEM software provides selectable digital display layouts in a variety of types and screen sizes from a round 3″ display to a slimline 7″ display so it will be compatible with your dash aesthetics. They have a comprehensive text-based fault warning and acknowledgement system and a series of ‘hidden until lit’ alarm lamps. For more information head over to our product page.